6 Things That Will Increase Your Chances Of Having Twins 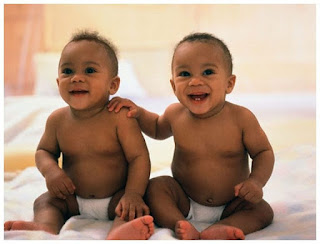 AgeWomen above 30 have a higher level of FSH (Follicle Stimulating Hormones). Normally this would mean lowered chances of fertility, but in some cases the follicles in the ovary overreact to the higher FSH levels and release two eggs instead of one, resulting in a twin pregnancy.DietAnother ironic tip to increase your chances of having twins is eating a high fat diet. This type of diet messes with the hormones and causes changes in the body’s reaction to fertility and increase the body mass index which can increase the chances of having two babies instead of just one.

(Photo: Heather Johnson-McCormick)Folic acidAs part of the routine supplements for pregnant moms, folic acid can also increase your chances of having twins through multiple ovulation and multiple egg implantation. So take 400mg to 1000mg of folic acid daily and eat foods rich in vitamin B.Oral ContraceptivesAs hard as it may seem there is higher incidence of women who get pregnant while they are on the pill or immediately after they stop taking the contraceptive pills having twins. The reason is not yet known but it’s worth a try.

(Photo: The Huffington Post)OystersThe myth about oysters being an aphrodisiac was based on the fact that oysters are high in zinc and when men eat them they increase the production and quality of the sperm. Better and stronger swimmers tend to fertilize more than one egg.Fertility TreatmentsIn vitro fertilization and other forms of fertility treatments stimulate the ovary to support more than one ovarian follicle towards maturity each month. This means more than one eggs is released so the chances of having twins are higher.Tell us your tips for twin births in the comment section

5 ways to make money online as a student or individual