Davido jokingly proposes to Chioma, she says “no”.

By Micheal King Last updated Feb 7, 2020
0
Share
In a cheesy new video, Popular Nigerian singer, Davido proposed to his girlfriend, Chioma.. and she said ‘No’.
Davido feigned disappointment as he stylishly walked away. 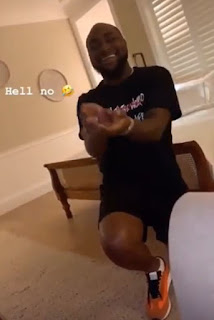 The video was cute though!
Watch below;
Video Player
00:00
00:11
Davido and Chioma made public their relationship in 2018 and since then it’s been a roller coaster journey as both love birds have been all over eachother, expressing enviable love & affection as well as travelling all around the world to put doubters of their love in misery and painful confusion.
Recall when Chioma turned a year older, recently, and her man wrote a sweet message to her.

”Happy Birthday TO THE LOML @thechefchi It’s your Birthday All week !!?? WHERE WE GOING ??!! God bless you for me ! Can never Imagine Spending the Rest of life With any one ELSE !! I love you BABY !! GREAT THINGS AHEAD !! Davido wrote

Around this time last year, the news of ‘assurance’ spread like wild fire when it was revealed that the singer purchased a multi-million Naira whip for his girlfriend who he revealed had been with him for over five years.

XENOPHOBIA:- “You All Are Fvcking Dumb” – Wizkid Blasts Burna Boy, AKA, M.I &…